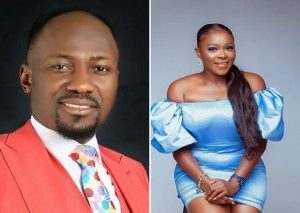 This comes after a popular blog published list of some actresses and BBNaija celebrities who allegedly had illicit affairs with Suleman.

The blog also accused the Apostle being diabolical and allegedly sleeping with the actresses.

Reacting to the blogger’s allegation, a number of actresses debunked the viral reports but never denied knowing the controversial man of God.

However, Ifemeludike who made a confessional video about her intimate affair with the cleric a few months ago, slammed her colleagues for denying their s3xual involvement with him.

During her confessional video, the actress alleged she slept with Suleman twice and was paid handsomely for her services but denied knowing that he was a cleric at that time.

She also revealed her colleague, Lynda-Clems Bishop, hooked her up with the Apostle, an allegation Lynda has since denied.

Addressing her colleagues, Ifemeludike told them to continue denying their acts but noted it was only a matter of time before the truth would be uncovered.

“Debunking saga. Truth cannot be covered. Please debunk your shit in peace, but allow us to decide who is a good man and who is an unrepentant pastor_titude. God cannot be mocked,” she wrote.

She added: “Vawulence around the corner!!! I’m ready

Judgement to every evil man masking in the name of God and Karma to those who encourages them by silently watching or covering evil just to maintain their image or status! Our society must be freed of demonic sexual predators hiding behind religion and affluence to destroy destines…

Just in few days it’ll be 1year I was pressured by the Holy Spirit to come out with a dark secret, a situation I walked into years ago after university, when I was financially vulnerable. Only few believed me, I was accused’s of chasing clout and had collected money. I was abused and threatened but i felt a heavy weight off my life and that was all that mattered,I saw the reassuring light in the sky. I knew my glory was restored. Fast forward today, same Nollywood that publicly attacked and insulted me is in the mud

with their “goodman” aka cheerful giver. Now it all makes sense why they hate me so much. Lol. Big up to gist lover

You’re a champion and the Almighty is with you. Thank you for exposing the truth and shaming the devil!”