Shooting At July 4 Parade In Highland Park, US. 6 Dead, Suspect Not In Custody 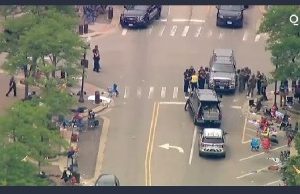 At least six people died and 24 were wounded in a shooting at a July Fourth parade in the Chicago suburb of Highland Park, and officers are searching for a suspect who likely fired on the festivities from a rooftop, police said Monday.

Highland Park Police Commander Chris O’Neill, the incident commander on scene, urged people to shelter in place as authorities search for the suspect, described as a white male wearing a white or blue T-shirt.

Lake County Major Crime Task Force spokesman Christopher Covelli said at a news conference that the gunman apparently opened fire on parade-goers from a rooftop using a rifle that was recovered at the scene. He didn’t know which building.

Covelli said police believe there was only one shooter and warned that he should still be considered armed and dangerous.

Police have not released any details about the victims or wounded.

The parade began around 10 a.m. but it was suddenly halted about 10 minutes later after shots were fired. Hundreds of parade-goers — some visibly bloodied — fled the parade route, leaving behind chairs, baby strollers, plush toys, bicycles and blankets.