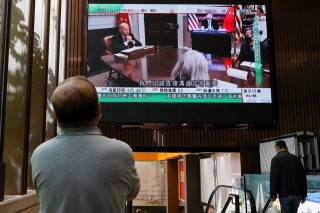 Chinese President Xi Jinping told U.S. President Joe Biden in a video call on Friday that the war in Ukraine must end as soon as possible and called on NATO nations to hold a dialogue with Moscow, but did not assign blame to Russia for the invasion.

In the call, which lasted nearly two hours, Biden was expected to tell the Chinese leader that Beijing would pay a steep price if it directly supports Russia’s invasion of Ukraine, a warning at a time of deepening acrimony between the world’s two largest economies.

The White House did not immediately comment after the call but was expected to give details in the early afternoon.

Earlier Friday, U.S. Deputy Secretary of State Wendy Sherman said China should ensure it does not end up on the wrong side of history over Ukraine by supporting Russia.

“China needs to stand on the right side of history. It needs to ensure that it does not backfill, financially or in any other way, sanctions that have been imposed on Russia,” she told CNN.

Xi told Biden that conflicts and confrontations were in non-one’s interests, according to a Chinese foreign ministry statement.

“The top priorities now are to continue dialogue and negotiations, avoid civilian casualties, prevent a humanitarian crisis, cease fighting and end the war as soon as possible,” Xi said.

He said all parties should support Russia-Ukraine dialogue and negotiations while Washington and NATO should also conduct talks with Russia to solve the “crux” of the Ukraine crisis and resolve the security concerns of both Russia and Ukraine, the statement said.

“The Ukraine crisis is something that we don’t want to see,” Chinese state media quoted Xi saying in the call, which it said was requested by the U.S. side.

Major nations should “respect each other, reject the Cold War mentality,” and “refrain from bloc confrontation,” the Chinese foreign ministry statement said.

On Thursday, U.S. Secretary of State Antony Blinken said the Biden administration was concerned China was considering directly assisting Russia with military equipment for use in Ukraine, something Beijing has denied.

Blinken said Biden would make clear to Xi that China will bear responsibility if it supported Russia’s “aggression” and Washington “will not hesitate to impose costs.” Russia says it is carrying out a special military operation in Ukraine.

Russia’s invasion of Ukraine, now in its fourth week, has killed hundreds of civilians, reduced city areas to rubble and sparked a humanitarian crisis as millions flee the country.

Russia fired missiles at an airport near Lviv on Friday, a city where hundreds of thousands had sought refuge far from Ukraine’s battlefields, as Moscow tries to regain the initiative in its stalled campaign against Ukraine.

Ukraine has added a new front in a U.S.-Chinese relationship already at its worst level in decades, further deflating Biden’s initial hopes of easing a wide range of disputes by using a personal connection with Xi that predates his term in office.

Ahead of the call, a Chinese aircraft carrier sailed through the sensitive Taiwan Strait on Friday. The USS Ralph Johnson, an Arleigh Burke guided missile destroyer, shadowed the carrier at least partly on its route. read more

China claims Taiwan as its own, and has stepped up its military activity near the islands, alarming Taipei and Washington amid concerns that Beijing might follow Russia’s example and use force.

Biden has been anxious to avoid a new “Cold War” with China, seeking instead to define the relationship as one of competitive coexistence, but China’s “no-limits” strategic partnership with Russia announced last month and its stance on Ukraine has called that into question.

China has refused to condemn Russia’s action in Ukraine or call it an invasion. While saying it recognizes Ukraine’s sovereignty, Beijing has repeatedly said that Russia has legitimate security concerns that should be addressed and urged a diplomatic solution to the conflict.

While Biden’s administration has threatened counter-measures if China helps Russia’s Ukraine effort, it and its allies have not yet decided precisely what steps they might take, according to a person involved in the conversations.

Targeting Beijing with the sort of extensive economic sanctions imposed on Russia would have potentially dire consequences for the United States and the world, given that China is the world’s second-largest economy and the largest exporter.

Analysts say China is unlikely to turn its back on Russia over the conflict in Ukraine, but its diplomatic efforts to appear even-handed are becoming harder to maintain and closeness with Moscow could cost Beijing goodwill in many world capitals.

However, Zhao Lijian, a spokesman for China’s foreign ministry, scorned the idea of Beijing being discomfited and instead lashed out against Western counties, accusing them of stoking fears in countries like Russia.

“Those who really feel uncomfortable are those countries that think they can lord it over the world after winning the Cold War, those that keep driving NATO’s eastward expansion five times in disregard of other countries’ security concerns, those that wage wars across the globe while accusing other countries of being belligerent,” Zhao said on Thursday.

A seven-hour meeting in Rome on Monday between U.S. national security adviser Jake Sullivan and China’s top diplomat Yang Jiechi was described as “tough” and “intense” by U.S. officials.

Biden’s administration has not offered evidence of its claim that China has signaled a willingness to help Russia. Moscow has denied asking China for military assistance, and China’s foreign ministry called the idea “disinformation.”

However, Russian Finance Minister Anton Siluanov said this week the country was counting on China to help it withstand the blow to its economy from punishing Western sanctions aimed at isolating Russia’s economy from the rest of the world.