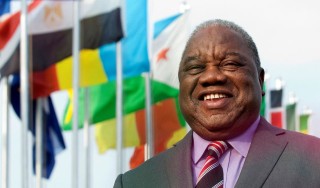 Zambian late former President Rupiah Banda, who ruled from 2008 to 2011 and died at 85 last week after a battle with cancer, was buried at Embassy Park in Lusaka, the capital, on Friday.

Soldiers gave Banda a 21-gun salute, while others carried his casket from Lusaka’s Anglican Cathedral of The Holy Cross to the burial site, while air force planes flew past.

In 2013, Zambia’s Parliament stripped Banda of immunity against prosecution, clearing the way to arrest him for corruption-related offences. He was later cleared in court of embezzling $11 million.