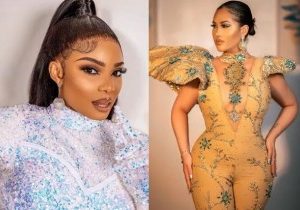 Nigerian actress and reality star, Iyabo Ojo has opened up about her rift with colleague, Caroline Danjuma.

The duo had a heated conversation during one of the episodes of The Real Housewives of Lagos reality show.

Iyabo also took to Instagram to drag Caroline, promising to reveal what really transpired between them at the reunion.

However, in a recent podcast, Iyabo said the fight happened because of a statement she made about Caroline’s bracelet and her billionaire lover.

She said: “She was raising her voice, we had an agreement that we were going to snub Laura if she starts her drama because we notice that Laura was trying to make everything about her which was okay but it was now becoming very annoying. So we said to ourselves if she comes with her mood swings we’ll just ignore her.

“So when I came to join them that day, so when I got there I forget we were back on camera and I was like your bracelet who got it for you, was it your ex-husband or your current boyfriend because the last time I and Caroline had a conversation which was a week before then she told me she was searching, so I didn’t know she had met a new man in one week so i was a bit confused when she said ‘her man her man’, so I felt she was talking about her ex-husband because she told me her ex-husband used to buy her a lot of expensive things.

“And for you to say, my man, my man means that she has a serious person so I was confused when I asked that question but I should not have asked that question on camera, but because I was coming from a place where I was with my girlfriends already, it took a while for me to say ‘Iyabo you are on camera’ and even at that same spot cause all of them looked at me like ‘Iyabo’ I was like ‘oh sorry’.

“And I still went to meet her in the room to tell her I hope you’re not upset, I didn’t know I was on camera, so that ended there, which was not an issue even though the show made it an issue until I saw her confessions so that was my take on that. So I never knew Caroline has issues about that because I went to her room I kept asking her about it and she said she was fine.”

Iyabo also explained that Caroline got upset when she saw her chatting with Laura after they had made a pact to ignore the latter.