​Busted! See How a Young Man was Caught on CCTV Stealing a Phone Using Bread at a Mini Mart in Lagos (See Photos)

A Facebook user identified as  Unugbua Nelson, has taken to the social networking platform and shared the shocking pictures of a young man who was caught on CCTV camera stealing a phone at a mini mart in Mobil filling station located at the Oniru area of Lagos.

The pictures, shows the young man at the cash desk in what looks like he was waiting for his change. He then goes behind the cash desk, leans over and pretends to be checking out the loaf of bread, and in the process, carries the phone while managing to distract the attendant at the counter.
The young man further goes ahead to purchase another loaf of bread and walks out of the shop leaving the attendants and other customers unaware of what had happened.

Although the whole incident was captured on CCTV camera, it is yet to be confirmed if the thief was eventually arrested. 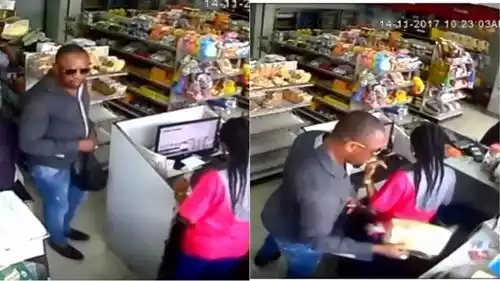