​“Caught The Snake That Swallowed N36M”; Man Poses With The Python Alongside With A Policeman (Photo)

An estate surveyor who lives in Abuja posed with a huge snake along with a policeman after capturing the reptile. The man identified as Usman Yusuf joined other Nigerians to make a joke about the bizarre report trending of a snake swallowing N36 million from the vault of one of its state branches.

Posing with the big snake along the road, Usman wrote online; Caught at last, the snake that swallowed #36M!!! Oga Police, well-done!!! 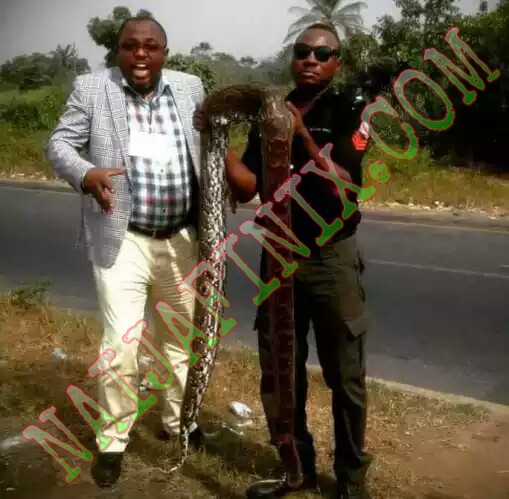 Report had it that a mystery snake was said to have sneaked into the accounts office of the Board in Makurdi and ‘stolen’ N36 million cash….

It was gathered that a team of auditors was dispatched to different state offices of JAMB to take inventory of the sold and unsold scratch cards and recover whatever money that might have either been generated or mismanaged during the period of the sale.