​Good News! Emmanuel Eboue To Be Signed To A New Club After Loosing His Wealth To His Divorced Wife 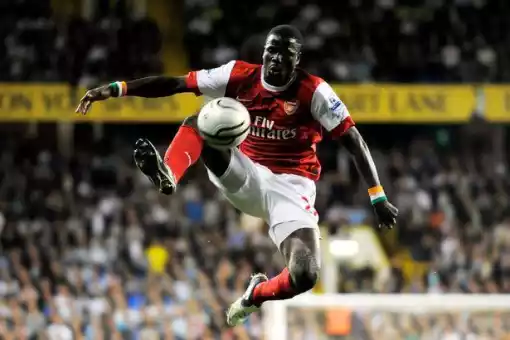 The former Arsenal defender revealed in an interview with the Mirror on Sunday that he has been pushed to the brink of suicide after losing everything and now spends his days hiding from ­bailiffs.
In addition to this, Eboue sometimes sleeps on the floor of a friend’s home and even cleans his clothes by hand because he has no washing machine.
According to Turkish Football, the club is ready to provide a salary that reflects his previous services to the club and find accommodation.
However, Galatasaray manager, Faith Terim in an interview with CNN said, “We heard news about Eboue in the dressing room, I was informed there, we will do whatever we can to help my friend.”
Eboue, now 34, spoke of his appreciation for his former manager in Istanbul. “I would be very happy if Fatih Hodja gave me the duty in Galatasaray, and Fatih Terim is my father, I love him very much, I do everything for him because I love him very much.” said Eboue.
Galatasaray have gone on to launch a campaign helping former players with troubles, with club legends Hasan Şaş and Necati Ateş sharing messages of support for the Ivorian, who now plays for Turkish/Cypriot side Turk Ocagi Limasol.
Source; naijaloaded.com.ng