President confirms Yusuf Buhari’s involvement in a motorbike accident, says he had a surgery and he is in a stable condition

The Senior Special Assistant to the President on Media and Publicity, Malam Garba Shehu, confirmed this in a statement yesterday. 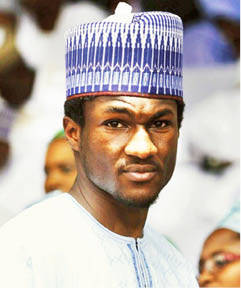 Shehu said Yusuf broke a limb and had an injury to the head, as a result.

According to him, Yusuf has undergone surgery at a clinic in Abuja and he was in a stable condition.

Shehu said the president and his wife, Mrs Aisha Muhammadu Buhari, were thankful to Nigerians for the good wishes and prayers for their son.

Crash not reported to police

The Gwarinpa Divisional Police Officer, DSP Nuruddeen Sabo said he was not aware of the accident.

However sources at a private hospital, where Yusuf was said to be receiving treatment

confirmed that a prominent personality was on admission at the hospital.

Our reporter who was at the hospital in Gudu District saw heavy presence of security operatives, while several vehicles with State House plate numbers were parked within the premises.

The hospital management did not confirm if the president’s son was on admission saying “They were not allowed to give out such information.”

Daily Trust reports that Yusuf Buhari was at the International Co

nference Centre (ICC), Abuja for the 50th birthday celebrations of Speaker Yakubu Dogara on Tuesday evening where the first family was invited.

He was there along with his sister, Halima and her husband. Their arrival at the venue of the event was announced at about 5.pm amidst cheers by guests.

Both President Muhammadu Buhari and his wife, Aisha, were supposed to be at the event, but they could not make it. The president was represented by the Secretary to the Government of the Federation (SGF), Boss Mustapha.

When it was time for guests to have special photographs with the speaker and his family, Yusuf, Halima and her husband were specially recognized to snap with Dogara.

It was observed that Yusuf stayed almost throughout the event, which ended at about 6:30.pm.