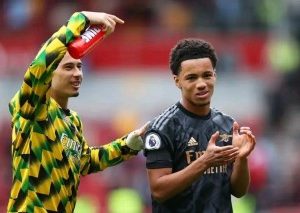 Fifteen-year-old England-born Nigerian, Ethan Chidiebere Nwaneri became the youngest player in Premier League history when he came on as a substitute for Arsenal as they returned to the top of the Premier League with a comfortable 3-0 win at Brentford on Sunday.

Nwaneri, who is 15 years and 181 days old, came on in the second minute of stoppage time, the first player under 16 to play in the competition. Harvey Elliott, now at Liverpool, previously held the record at 16 years and 30 days when he played for Fulham in 2019.

Arsenal manager Mikel Arteta said: “He has trained a couple of times with us and I had a feeling yesterday that if the opportunity came I would do it.

“I think it sends a strong message about who we are as a club. I told him yesterday he would be with us and he had to be ready. He is ready. When he went on I said: ‘Congratulations and enjoy it.’

“We want to give opportunities. When there is talent and personality and when players love what they do, and when they have no fear, the doors are open for them to explore where they can go. 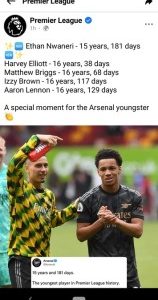