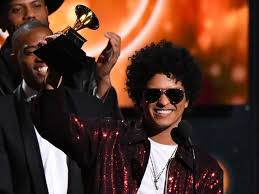 Retro R&B star Bruno Mars was the surprise big winner Sunday at the Grammy Awards, with a clean sweep of the top awards including Album, Record and Song of the Year, and six overall.

Rapper Kendrick Lamar took home five Grammys on a night that featured powerful #MeToo moments, especially from Kesha, who delivered a searing performance of her song “Praying,” about her struggles with former producer Dr Luke.

Mars won all of the awards for which he was nominated.

More than 13,000 music professionals in the Recording Academy voted to determine the winners of the Grammys, which were handed out in New York at Madison Square Garden.

Here is a list of winners in key categories:

Record of the Year (for overall performance of a song): Bruno Mars, “24K Magic”

Song of the Year (for songwriting): Bruno Marsalong with songwriters Brody Brown, James Fauntleroy and Philip Lawrence and production team The Stereotypes, “That’s What I Like”

Best R&B Song: Bruno Mars, “That’s What I Like”

Best R&B Performance: Bruno Mars, “That’s What I Like”

Best Rock Album: The War on Drugs, “A Deeper Understanding”