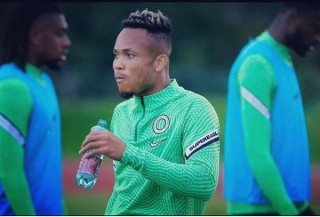 Ejuke was in Nigeria’s squad to the 2021 Africa Cup of Nations in Cameroon, but was omitted from the list for the two-legged qualifiers against the Black Stars.

Instead, Eguavoen called up the likes of Ademola Lookman, Emmanuel Dennis, Moses Simon and Samuel Chukwueze.

As his exclusion continues to generate debate, Eguavoen opened up on why snubbed the winger for the African classic.

“I’ve spoken to most of them one after the other. The best position and then another alternative position,” Eguavoen said in an interview with Elegbete TV.

”Now as at today, on the left side which Ejuke said is his best position… I’ve seen Ejuke. I still hold him close to my heart. Now we’ve given an opportunity to Ademola Lookman and then we have Moses Simon.

“On the right side, Dennis has come back and then Chukwueze. If you look at it, we are strong here and as well strong there.

“And then up there, we have Osimhen, Sadiq who’s doing well in Spain right now and the experience of Odion Ighalo. I also spoke with Olayinka as well, I know they have qualities.

“Ighalo last played for me in the U-23 but I’ve watched him play up to where he is now and it will be nice to see him closely again. It’s not like the door is shut for everyone out there. The door is still open for everyone.

“This is only a game and what we did is to have two players in each position and then three goalkeepers and others are on standby. Then we have a balanced team.”

Ghana will host the first leg at the Baba Yara Stadium, Kumasi on March 25.