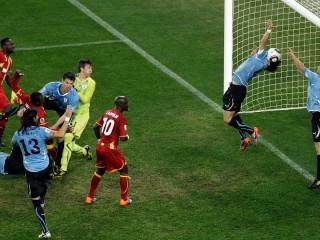 President of Ghana’s Football Association (GFA) Kurt Okraku insists the Black Stars will be eyeing revenge against Luis Suarez and his Uruguayan teammates at this year’s World Cup in Qatar.

In Friday’s draw the Black Stars were placed in Group H alongside Uruguay, Portugal and South Korea.

The last time the Black Stars clashed with Uruguay was in the quarter-finals of the 2010 World Cup in South Africa.

With seconds left to play and the game tied at 1-1 in extra-time, the Black Stars were awarded a penalty after Suarez stopped a goal bound header with his hands and was sent off.

Unfortunately, star striker Asamoah Gyan hit his effort against the cross bar and Uruguay went on to win via penalty shootout.

And after both teams were paired together at Friday’s draw, Okraku told BBC Sport Africa: “We believe that it will be revenge time.

“We thought we had clearly won that particular game but for that save from Suarez. It is very interesting for us to pitch against them again, obviously with fond memories [this time].

“It is important that we all set the record straight.”

The Black Stars will tackle Portugal in the opening game of the Group before facing South Korea in the next group game.

They will wrap up their group campaign with a clash against the first ever winners of the Mundial in 1930, Uruguay.

Ghana, the four-time African champions will be making their fourth appearance at the Mundial after participating in the 2006, 2010 and 2014 editions.

The West African giants returned to the World Cup on Tuesday after eliminating regional rivals Nigeria, advancing on away goal advantage.