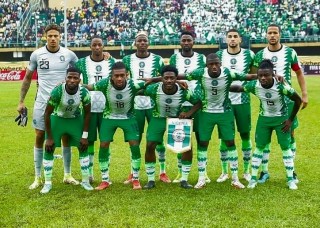 The Super Eagles will host Sierra Leone in their first qualifying game for the 2023 Africa Cup of Nations in Cote d’Ivoire , reports Completesports.

The three-time African champions are in Group A with Sierra Leone, Guinea-Bissau and São Tomé/Principe or Mauritius.

The Super Eagles will then fly to either São Tomé or Port Louis for their matchday two encounter.

The window for these two matches is 30th May – 14th June.

In September, with the window for Matchdays 3 & 4 being 19th – 27th September, the Eagles will tango home and away with the Wild Dogs of Guinea-Bissau.

The Matchdays 5 & 6 are within the period 20th – 28th March 2023, and will see the Eagles go away to Freetwon before returning home to square up to either São Tomé and Príncipe or Mauritius.

The Confederation of African Football will have to determine the team that will compete in the group between Sao Tome and Mauritius.

Mauritius have a pending protest against São Tomé and Príncipe, who won their preliminary qualifying fixture, insisting that one São Tomé player had tested positive for covid-19. São Tomé & Príncipe continue to dispute this assertion.

The top two teams in the group will qualify for the 34th Africa Cup of Nations finals taking place in Cote d’Ivoire next year summer.