Atiku Abubakar had released a one-minute video clip of his manifesto via his verified Twitter page on Wednesday morning eliciting a reply from Adeyanju. 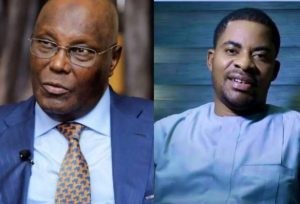 Nigerian activist, Deji Adeyanju has called out Atiku Abubakar, the presidential candidate of the Peoples Democratic Party (PDP) over a campaign video he posted on Twitter.

Atiku in the video promised to secure the country, make the people better educated and assure them of a booming economy in 2023.

After watching the video, Adeyanju called out Atiku, urging him not to make promises he cannot keep.

He reminded the PDP presidential candidate of how the ruling All Progressives Congress (APC) promised restructuring in 2015 and they denied it thereafter.

He wrote: “You people have started again. This was how APC promised restructuring in 2015 and they denied thereafter.”