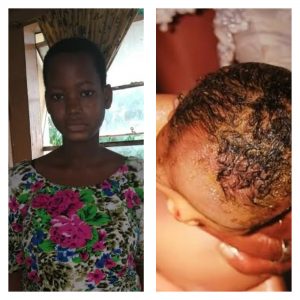 Police in Ogun State have arrested one Amudalat Taiwo for allegedly throwing her 12 day-old-baby into a pit latrine.

Amudalat, 21, was arrested following a complaint lodged at the police station by her landlord, one Oshunshina Olawale.

According to the Police Public Relations Officer (PPRO) of the Ogun State Police Command, Abimbola Oyeyemi, Amudalat’s landlord had reported that one of his tenants at 28, Isheri Street, Ilaro, Yewa South local government, went to the toilet on the early morning of 20th of June, where the tenant heard the cry cry of a baby.

On the strength of the complaint, the DPO in charge of Ilaro Divisional Police Headquarters, CSP Opebiyi Sunday, led detectives to the scene where the latrine was broken and the baby ferried out of the pit.

Investigations revealed that the baby was birthed by Taiwo, who was promptly arrested.

“On interrogation, she claimed that she was an orphan and married to one Taiwo Owolabi, who had already married another woman with five children. She stated further that the husband was not taking care of her and the baby.

“And since she has no means of catering for the newly-born baby, she decided to do away with her.

“The said husband had been arrested for failure to provide necessary support while the case has been transferred to Anti-Human Trafficking and Child Labour Unit of State Criminal Investigation and Intelligence Department on the order of the Commissioner of Police, Ahmed Iliyasu, for further investigation and possible prosecution of the suspects,” the PPRO stated.

Oyeyemi added that the baby has been stabilized and is presently at the Stella Obansanjo Motherless Babies Home, Abeokuta.