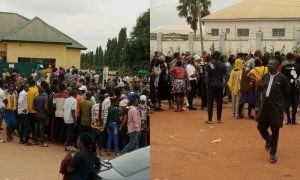 On Friday, some apparently dissatisfied residents of the Federal Capital Territory, FCT Abuja expressed their anger and frustration over their inability to register for the Permanent Voter Cards, PVC.

In what appears to be a last-minute rush, many residents thronged Continuous Voters Registration, CVR centres on Friday to register for the PVC ahead of the 2023 general elections.

Across the nation’s capital on Friday, many registration centres were overcrowded with persons struggling to get their PVCs, raising fears that many people may not be registered.

DAILY POST visited some of the registration centres in the city particularly, within the Bwari Area Council.

Amongst the hundreds of persons who stormed the CVR centre in Bwari, only a few were able to get captured following low input by the Independent National Electoral Commission, INEC officials.

As of 2pm when DAILY POST visited the Bwari centre, only about 60 persons had successfully registered despite the teeming crowd.

Our correspondent gathered that the centre became rowdy at about 10am when residents waiting to register became upset that the few available INEC officials could not attend to them.

The centre had just two computers used for the registration at the Bwari INEC office, DAILY POST can report.

One Mr Cletus Chukwu who was angered over the slow pace of the exercise told our correspondent that his attempt to get registered since Monday had failed.

He said, “I have been coming here since Monday this week.

“Every day, I come to this centre early in the morning still, I have not been able to register. Many of us are definitely going to be disenfranchised because, with the way things are going, it will be very impossible for some of us to participate in the election.

The situation in Kubwa and Dutse-Alhaji centres of the FCT is not any different from that of Bwari as intending voters lamented difficulties in getting registered.

It was gathered that at the Duts-Alhaji centre, transfer of polling unit and other minor services had more attention than fresh registrations.

Felix Ogaba, a resident who was also battling to get registered, said the exercise was not orderly. He alleged that those who had connections with some of the officials do not go through the normal processes.

“We have been here since 3am and here we are. We have over 400 names in that list and I am number 60. I doubt if they will reach my number today. The same thing happened yesterday and I got angry and left”, he said.

Miss Jane Obande said she has no other option but to forfeit the 2023 elections, saying all her efforts to get the PVC have yielded no good results.

“Many of us have already been disenfranchised. I can’t continue anymore, I and my siblings have been coming here since Monday yet as it is now, it is not possible for us to register before the closing date”, she added.

Jane also appealed to the electoral body to extend the deadline in order not to disenfranchise Nigerians who are ready to participate in the coming general elections.

An official of INEC who spoke to our correspondent on conditions of anonymity claimed poor network connectivity was one of their major challenges, explaining that the Bwari centre can only register about 200 persons in a day.

He said, “Among other challenges, I think the major issue here is network service. Sometimes the site will be down maybe because of too much traffic. But I can assure you that we will do our best”.

DAILY POST reports that the exercise, according to the electoral body will end on July 31 (Sunday).