25.6m Living With HIV, African Region Most Affected – WHO 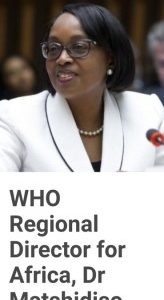 World Health Organization (WHO) Regional Director for Africa, Dr. Matshidiso Moeti, has said the African region continues to be most affected out of the 25.6 million people living with HIV worldwide.

She said this in her message to commemorate the World AIDS Day which is celebrated globally every December 1, adding that, WHO support people living with HIV and remember those who have lost their lives to AIDS.

“This year, the theme is “Equalise” urging each one of us to address the inequalities driving the epidemic and holding back progress in ending AIDS,” she said.

She added that ending inequalities and getting on track to end AIDS by 2030, the heads of state and government are committed to end all inequalities faced by people living with and affected by HIV in communities and countries, which are barriers to ending AIDS.

Dr. Moeti added that progress has been made over the past decade, reducing new infections by 44% and reducing AIDS-related deaths by 55%.

WHO representative said: “This progress was made because WHO and partners advocated for and supported the expansion of new HIV prevention and treatment technologies; provided guidance on combination HIV prevention, testing and treatment; built capacity in countries to improve data availability and quality; increased access to affordable medicines, diagnostics and health technologies and supported national HIV treatment catch up plans in west and central Africa.”