£4,269 Raised As Eedris Abdulkareem Gets Set To Undergo Kidney Surgery 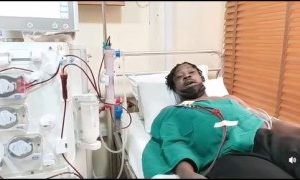 The veteran singer is scheduled to undergo major surgery for a kidney transplant with £4,269 (N2,136,345.49) raised to that effect, The Nation reports.

Abdulkareem, who was recently diagnosed with kidney failure, expressed gratitude for the affection and support he’d been receiving from his followers and well-wishers upon the announcement of his ailment.

On Friday, the “Jaga Jaga” singer shared details of a GoFundMe account via his Instagram page, explaining it was created based on requests from concerned individuals.

Yetunde, wife of the ailing singer, was also reported to be his kidney donor.

Though the family member wasn’t disclosed by the singer’s team, when they took to social media to intimate his fans and followers of his current health condition, an insider claimed the wife has opted to be the donor.

“The wife is donating her kidney for him. All that is left now is to get the money needed for the surgery,” the insider said.