Enugu——The Eastern Consultative Assembly, ECA, has condemned what it described as the brazen rigging of the governorship election in Osun State, saying that the region will not vote in the 2019 presidential election as the ruling All Progressives Congress, APC, has made it impossible for people’s vote to count. 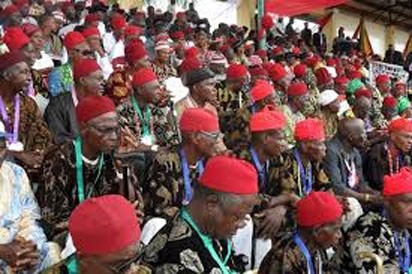 This was contained in a statement jointly signed by the Deputy Leader of ECA and the Secretary, Evangelist Elliot Ugochukwu-Uko, after a meeting of the group in Enugu, yesterday.

The statement read, “The horror of the brazenly manipulated Osun rerun elections confirms the fears of all and sundry,that this inept government, will never allow a free, fair and credible presidential elections next year.

“The daylight robbery in Edo plus the brutal show of force in Ekiti, both warned the world of what to expect in 2019.

“The macabre dance of shame in Osun,has removed whatever doubts remaining in our minds,that 2019 elections will be sham elections.

“The ruthless use of security forces to oppress and intimidate supporters of the opposition, the clear employment of the army, the police, the Department of State Services, DSS, and other government security agencies in open aid of the ruling party, plus the subtle endorsement of vote-buying, all, have made it impossible for us to have confidence in the electoral process as managed by the present arrogant government.

“Accordingly, we find it difficult to cue in the hot sun to cast our votes, only for a vicious cabal with a born-to-rule mentality,to ensure our votes do not count.

“Now we know why all military and security agencies are deliberately placed in control of one particular region, now we know why the 97%/5% policy of the central government is implemented with single mindedness.

“Because decision has already been taken, that votes will not count, even INEC has also been placed under total control of the ruling party. Why would any sensible person, bother to go out to vote.

“The confidence of the people in the electoral process, has been completely destroyed by the armed robbery that was Osun Rerun election.

The fact that the perpetrators of this heist, are boastful about it, confirms that we are in big trouble as a country.

“Going through the brigandage and pillage of the former ruling party, only to fall into the hands of this ruthless and vicious cabal, is a costly mistake.

We hereby apologise to the IPOB, who saw clearly, earlier than anybody, that this inept government do not have the intention to ever conduct fair and credible elections.”