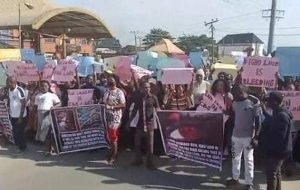 The Abia state government says it will not disband the Ebube Agu security outfit.

Sopuruchi Bekee, Abia commissioner for homeland security, said this on Tuesday amid protests demanding the disbandment of Ebube Agu.

The security outfit was set up in April 2021 by the south-east governors to tackle insecurity in the geo-political zone.

But in recent months, reports of arbitrary killings have been linked to personnel of the security outfit.

In July 2022, Amnesty International had called on the federal government to investigate allegations of extrajudicial killings involving Ebube Agu operatives.

The human rights advocacy group made the demand a few days after some persons, said to be wedding guests, were allegedly killed by Ebube Agu operatives in Otulu in Oru east LGA of Imo state.

In the past few days, protesters have taken to the streets in parts of the south-east, including Imo, seeking the disbandment of the security outfit.
According to NAN, on Tuesday in Abia, protesters converged on Ariaria international market, from which they moved through Faulks road, Aba-Owerri road, Brass road to Aba north LGA, chanting anti-Ebube Agu songs.

The protesters also accused Ebube Agu of being a “murderous outfit”.