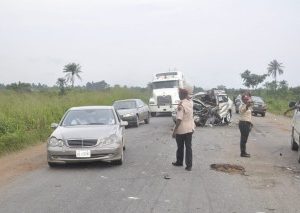 Nigerian youths in Abia State have gone haywire, causing serious commotion in the area during a clasj with FRSC.

This happened after a male operative of the Abia Command of the Federal Road Safety Corps (FRSC) whose identity is yet to be ascertained reportedly stabbed a commercial bus driver identified as Obinna to death.

The incident happened at Umuikaa junction, along the Port Harcourt/Aba/Enugu Expressway in the Isiala Ngwa Local Government Area of Abia State on Tuesday.

The deceased from Umuakaa in Njaba, Imo State, had reportedly arrived at the checkpoint and was asked by road safety officials for money, which he refused to part with.

And as he was about to move, one of the FRSC officials held his car steering wheel and in an ensuing scuffle, allegedly stabbed him with a dagger.

He was rushed to the Ronald Hospital, Mkpuka, where he was confirmed dead by doctors.

The situation was said to have caused tension in the area as youths stormed the FRSC office and set it ablaze.

They also protested against the presence of personnel of the agency and other security operatives manning checkpoints in the area.