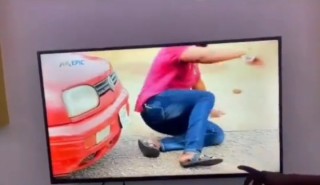 Nigerians have given up on Nollywood after a poorly edited accident scene by actor, Ken Erics was showed on DStv channel, African Magic.

Even the actor himself said he’s disappointed. He took to his Instagram page to make this known. It happened after a Twitter user shared the video showing the moment the thespian was hit by a car in a movie scene.

The video went viral in no time and stirred tons of reactions from social media users because of how fake the accident scene appeared.

Many Nigerians stated that the Nigerian movie industry needs to do better, especially in their edits. Reacting the actor said: “Really, Director??? Editor???”

An Instagram user @abayaehi_ wrote, “I nor understand what is wrong with Nigeria movie industry? Dem they go backwards abi nah weti

@martha_ose1 wrote, “I watched this movie yesterday… I almost fainted

Na the guy jam the car”.