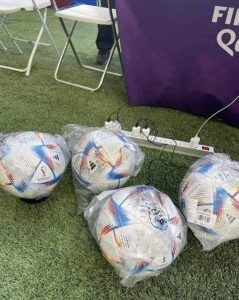 World Cup balls need to be charged like a phone,
Now, photos have begun to emerge online that have left fans giggling as the balls were shown lined up on the side of the pitch while plugged into an electric port.

Yes, that’s right, the 2022 World Cup ball needs to be charged just like any modern smartphone.

Adidas smart ball proves Cristiano Ronaldo didn’t get a touch
However, as much as he tried to argue, Ronaldo’s case simply fell away when Adidas released the readings from their incredible smart-ball.