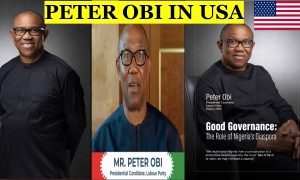 Former Commissioner for Information in Edo state, Prince Kassim Afegbua has said Peter Obi, presidential candidate of Labour Party should remain in Nigeria and canvass for votes instead of going abroad as he is currently doing.

Speaking in an interview with DAILY INDEPENDENT, Afegbua also said he is happy that Obi is contesting in 2023 as he is going to reduce the votes the Peoples Democratic Party (PDP) and its presidential candidate, Atiku Abubakar will get in the South East.

He said “Yes, the 2023 presidential election is now a three-horse race and I am happy that a Peter Obi is running because he is going to take away from the support base of PDP”.

“I will support anything that can be done to hurt the PDP so that they can bleed to death in terms of the presidential candidate so that we don’t have a continuation of northern presidency”.

“Those 14 APC governors who met and took a bold decision that presidency should be ceded to the South under APC are true heroes of democracy. I am in support of the actions they took which led to the emergence of Asiwaju Bola Tinubu as the party’s candidate”.

“Now, the point is, a Peter Obi is representing some of the younger population. Of course, he goes on the streets and you see a lot of young people hailing him but I doubt if that kind of impact can sink into the rural areas where the real votes are”.

“Rather than Obi to stay in Nigeria and be reaching out to the different components of the state, he prefers to globetrot, visiting New York, CNN and so on. Those people will not come and bring the votes. He needs to remain here so as to get the votes”.

“Tinubu has not travelled for quite some time. He has been consulting, reaching out to the major stakeholders”.

” Governor Wike is holding on to one faction such that out of 19 executives of the NWC members of PDP, when the national chairman, Iyorchia Ayu called for a meeting, only four attended.15 members stayed away from the meeting. That means Ayu does not enjoy the loyalty, support and solidarity of those 15 members. That is a big minus for him”.