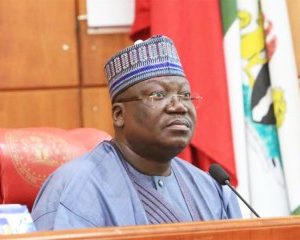 Lawan spoke on Thursday when he received members of Polling Unit Ambassadors of Nigerian (PUAN), an election observation group, at the national assembly complex in Abuja.

The senate president, who was presented with a red flag against vote buying and selling, called on Nigerians to vote for candidates that have their interests at heart.

“I am waving this flag against voter inducement, so I call on all Nigerians, especially the youth, to shun vote buying or selling their votes during the election,” Lawan said.

“It gives me the opportunity to take this red flag to show it to all potential vote buyers and sellers that vote buying is criminal and punishable by the electoral act.

“Vote selling is also criminal and it’s punishable. If you are a voter, keep your vote and decide who to vote for.

“When you vote, vote for someone or a political party that will make your life better. If you sell your vote, it’s equivalent to selling your freedom.”

Lawan said individuals who engage in vote trading stand the chance of being prosecuted, adding that security agencies have been tasked with arresting and prosecuting those who get involved in the act.

Suleiman Dabas, ambassador-general of the group, called on politicians to shun voter inducement.

Dabas said the group would closely monitor polling units to expose people engaged in vote buying in the 2023 elections.