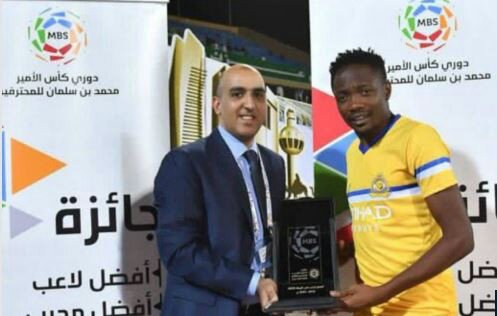 Ahmed Musa has been named the Saudi Professional League Player of the Week following his outstanding display for Al-Nassr in their 3-0 win over Al Quadisiya on Wednesday.

The Nigeria international scored all the three goals to open his account in the division, thus, helping Jose Daniel Carrenoon’s men to the second spot in the league log with 12 points from four games behind Al Hilal Riyadh.

The 25-year-old joined the Global from English Premier League side Leicester City on the back of his impressive World Cup performance in Russia for the Super Eagles.

And following the top-notch display against Al Quadisiya, the forward has been rewarded with the individual prize along cash gift much to his delight.

“Thank you to all the people who voted for me. It is always an honour to have your respect and support,” Musa tweeted.

The former CSKA Moscow player will hope to continue the form when Al-Nassr lock horns with Al Hazm in their next league game on October 4.