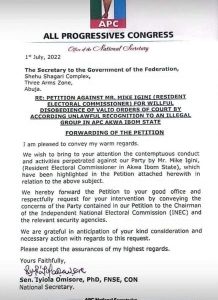 The ruling All Progressives Congress (APC) has dragged Akwa Ibom State Resident Electoral Commissioner (REC) Mike Igini to the Secretary to the Government of the Federation Boss Mustafa over the non-recognition of former Niger Delta Affairs Minister GodswilL Akpabio as a senatorial candidate.

The APC accused Igini of disobeying a court order for AkpabIo’s candidacy to be upheld and for unlawfully recognising a candidate produced by a factional group in the state chapter of the party.

In a petition to the SGF, the party wondered why an INEC official who is supposed to be an unbiased umpire, was meddling in intra-party affairs.

The APC, therefore, requested Mustafa to forward the petition dated July 1 to the Independent National Electoral Commission (INEC) National Chairman Mahmood Yakubu, as a reminder of its earlier complaint against Igini.

The petition signed by the National Secretary of the party, Senator Iyiola Omisore, was sighted by The Nation yesterday.

The Nation gathered that the ruling party was peeved by the REC’s alleged statement that INEC did not witness its senatorial primary for Akwa Ibom North-West that produced Akpabio as a candidate.