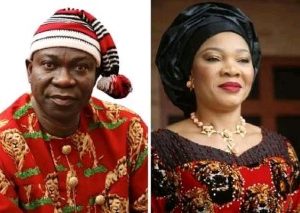 After 42 days in detention, a former Deputy Senate President, Ike Ekweremadu will be brought to UK court today for commencement of his trial for his alleged involvement in organ harvesting.

Recall that Mr Ekweremadu and his wife, Beatrice Ekweremadu, were on 23 June arrested in the UK by London Met Police and charged with conspiracy to traffic a child to the United Kingdom in order to harvest organs.

According to the prosecutors, the couple has a daughter who has a kidney-related disease and has been on dialysis for quite some time. They added that they believe the plan was to use an organ from the boy on their daughter who needs a kidney transplant.

In a turn of events, David Nwamini (alleged victim of trafficking) told doctors he was 15 and was coerced by the Ekweremadus into donating his kidney.

However, the Nigerian government said all its records show that Mr Nwamini was not a minor and was 21 years old.

The Westminster Magistrate Court in the United Kingdom later ruled that he is not a minor.

The Ekweremadus are facing charges of conspiring to traffick a person for organ harvesting in violation of the Modern Slavery Act 2015.

The case was transferred to Central Criminal Court in London popularly known as Old Bailey where Mrs Ekweremadu was granted bail on stringent conditions. But the senator was denied bail because he was said to be a flight risk.

The trial preparation hearing is scheduled to take place on Thursday and a subsequent trial next year.

Obinna Obeta, a Nigerian doctor practising in the UK, has been charged with plotting with the Ekweremadus to traffic a man into the UK to harvest a kidney for their daughter.

Mr Obeta appeared before Bexley Magistrates’ court on 13 July and is charged under the Modern Slavery Act with arranging the travel of a 21-year-old man between August 2021 and May 2022 to exploit him.