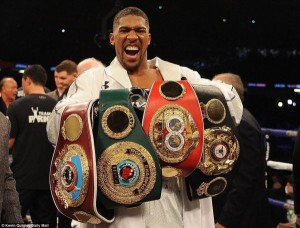 The unified champion is desperate to hold on to his three major world titles , but both the IBF and WBO have called their mandatories . Bulgarian heavyweight is the IBF ’ s No . 1 contender , while the WBO installed Oleksandr Usyk as their mandatory challenger when he moved up from cruiserweight.

Joshua may be forced to give up one of his world titles if he cannot convince either the IBF or WBO to postpone their fight order until the second half of 2020 .

Eddie Hearn promotes Joshua and Usyk and will be confident he can arrange a fight with the Ukrainian and AJ whether or not the British champion gives up the WBO belt .

An IBF spokesperson told Sky Sports , ‘ I have just been told that the Pulev and Joshua camps have asked until January 31 to negotiate. ’

Hearn is hopeful he can match Usyk with Derek Chisora in his next fight and the former undisputed cruiserweight champion can then take on the winner of Joshua vs Pulev later in the year .

‘ Conversations are ongoing with all parties to plan what’ s next and it will really come to a head over the next few weeks , ’ Hearn said last week .

‘ We are still awaiting clarification from the governing bodies to confirm who is chronologically next , but right now everything is in play .

‘ In terms of Usyk versus Chisora that is still a potential outcome , but 7 March is unlikely. Instead we have March 28 on hold at the O 2 . ’