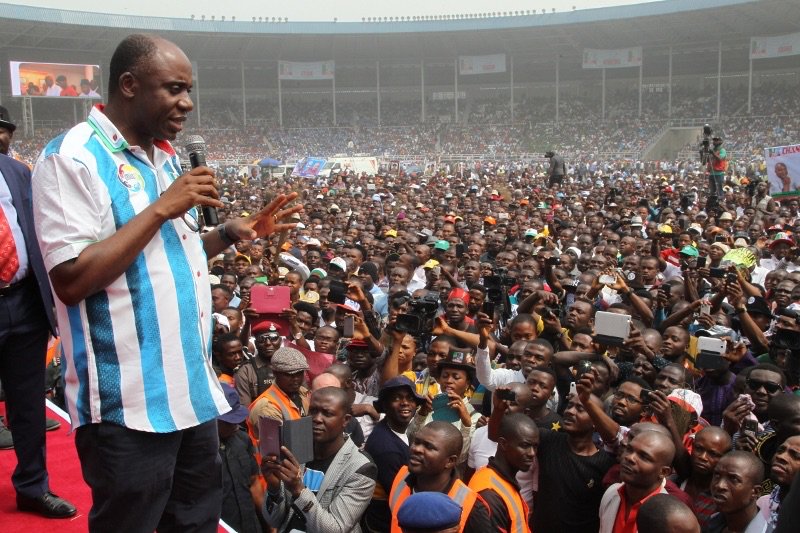 Minister: Majority are working with me

Major stakeholders of the ruling All Progressives Congress (APC) have kicked against the re-appointment of the Minister of Transportation, Hon. Rotimi Amaechi, as the Director- General of the President’s Campaign Organisation in the 2019 election. The stakeholders include party leaders, governors elected on the party’s platform, ministers, and National Assembly members.

New Telegraph learnt that the argument of the APC stakeholders is that the President cannot just appoint anyone as the Director- General of his campaign organisation without consulting the party’s hierarchy.

Amaechi served as the Director-General of the Buhari Campaign Organisation in 2015, but our correspondent gathered that the party chieftains are rooting for someone who is “more matured” to handle the position ahead of the 2019 polls. They reasoned that Amaechi lacks the temperament to handle such position now that the ruling party is facing confidence crisis.

A source, who disclosed this to New Telegraph, said the APC chieftains also posited that Amaechi is presently not holding a strategic position to be able to galvanise members of the party for the President’s reelection in the forthcoming elections.

The source said: “The opinion of most of the party stakeholders is that the Transportation Minister was a sitting governor and chairman of the Nigerian Governors’ Forum (NGF), when he held the position of Director-General of the Buhari Campaign Organisation in 2015. “According to them, Amaechi is just a member of the cabinet now and may not wield the kind of influence he had during the last elections.

The party chieftains are, therefore, saying that the President cannot just appoint a minister as the director-general of his campaign organisation without consulting the party’s hierarchy.”

The source further disclosed that what particularly infuriated the governors, APC leaders and ministers is that they believed that the appointment of Amaechi as the campaign boss was done by the trio of President Buhari; Kaduna State governor, Mallam Nasir el- Rufai and Amaechi himself. The major organs of the party, which Amaechi is going to work with should his appointment stand, were not consulted, according to a party source.

This, according to him, explains why only two members of the APC National Working Committee (NWC) – National Secretary, Mai Mala Buni and National Organising Secretary, Senator Osita Izunaso, are the only ones working with Amaechi on the President’s second term project.

His words: “The way Amaechi’s appointment as the campaign director-general was made, without due consultation of the various organs of the party, informs why only Buni and Izunaso are the ones working with Amaechi. Other members of the NWC are not with him.” He also revealed that the development is responsible for the way the governors and ministers have been responding to meetings called by the Transportation Minister on the President’s reelection bid.

“When Amaechi calls for meetings, the governors and ministers reluctantly attend to avoid being seen as opposition to the president’s ambition as attendance is usually taken at such meetings. So, it is just like they are being blackmailed to attend the meetings. “It got to a level that a South-West APC governor, who is close to the President, had to go to the villa to express his displeasure over Amaechi’s appointment.

He particularly told Buhari that he will not sit with the campaign organisation with the former Rivers State governor as the director-general.”

Our correspondent further learnt from party sources that the lack of confidence on Amaechi came to the fore when he called for a meeting with the APC governors, only for one of the governors to inform the minister that if there is anything to discuss about politics, he should liaise with his predecessor.

Amaechi’s colleagues in the cabinet are also not comfortable with his choice. At a recent meeting held among the ministers where Amaechi briefed his colleagues on his appointment, it was a cold response. According to him, “Some of the ministers told Amaechi that they are all appointees of the President, so if he (Buhari) has any message for them, he should summon them or pass the message through Chief Audu Ogbeh (Minis-ter of Agriculture), who is the chairman of the Ministers’ Forum.” Ogbeh acts as a liaison officer between his colleagues and President Buhari.

The ministers usually meet at Ogbeh’s residence to take a common position on some issues which they could not express or agree on during the Federal Executive Council (FEC) meetings because of the presence of other presidential aides. Amaechi had succeeded in railroading the ministers into the campaign. Two meetings have been called with one held and another shelved.

The only meeting held so far had 18 ministers in attendance. The source also expressed concern over how Amaechi intends to convince some party chieftains who worked for Buhari’s victory in the 2015 presidential election, but were abandoned after his government was inaugurated, to key into the 2019 project.

Amaechi did not reply to an SMS sent to him on the development. An aide to Amaechi, who described the misgivings as normal in politics, however, told our correspondent that no one can fault the competence of the Transportation Minister. He added that such dissenting voice is not unexpected, given the divided loyalty among APC chieftains.

“It is natural that some people will not be happy with Amaechi’s appointment as the Director- General of the Buhari Campaign Organisation. That is natural. They may have their reasons, which are likely to be personal, but definitely not over his ability to do the job.” The aide added that a majority of the APC governors, ministers and members of the National Assembly are working with Amaechi, and advised those who have objection to his appointment to direct their protest to the President.

“There is no doubt that the vast majority of APC governors, ministers and members of the National Assembly are working with Amaechi on the President’s re-election bid, but if anyone is opposed to his headship of the campaign organisation, the most decent thing to do, is to channel his or her grievance to the appropriate quarter,” he said.

The minister’s aide told New Telegraph that “you don’t expect a governor who wanted to head the presidential campaign in 2019, but lost out to support the choice of Amaechi. So it is all politics.” A source said against the growing discontent among stakeholders, President Buhari will soon clear the air on Amaechi’s appointment.

“The Presidency will soon issue a statement on Amaechi’s appointment as Buhari’s campaign DG. There is need to clear the air on the issue.

Don’t forget that a minister even asked the president during the last Federal Executive Council (FEC) meeting if truly Amaechi has been appointed. I’m sure a statement to that effect will soon be released,” a source told New Telegraph.

When contacted on the issue, National Publicity Secretary of the APC, Bolaji Abdullahi, said: “It is the prerogative of a candidate to choose who leads his campaign. It, therefore, has nothing to do with the party.”