APC Reconciliation: Tinubu In Dilemma Over Grouse With Saraki, Oyegun 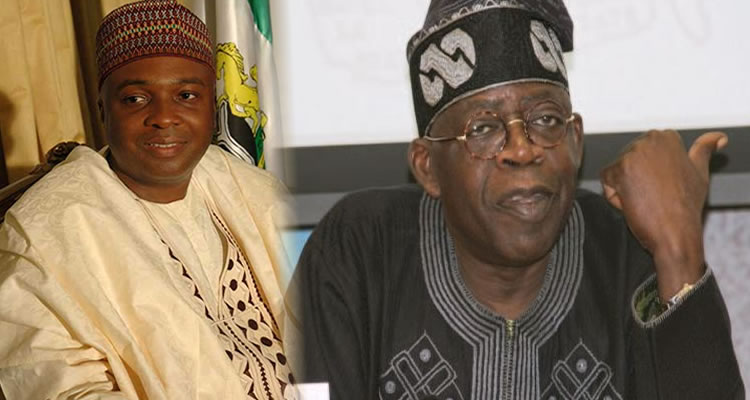 Following the appointment of Asiwaju Bola Ahmed Tinubu, National Leader of the All Progressives Congress (APC) by President Muhammadu Buhari to reconcile aggrieved APC members ahead of the 2019 elections, indications emerged on Thursday of possible hurdles that may pose serious challenges to Tinubu’s efforts and may dent the party’s chances in the forthcoming general election.

Analysts said after a sweeping victory that brought the APC to power in 2015, the party could not consolidate its gains as evident in the increased bickering amongst party bigwigs at all levels especially among leaders of factions that came together to form the party in February 2013.

The party that emerged from the merger of Action Congress of Nigeria (ACN), the Congress for Progressives Change (CPC), the All Nigeria Peoples Party (ANPP) and a faction of the All Progressive Grand Alliance (APGA) is currently fragmented owing to crisis among leaders both at the federal and across some states of the federation.

APC chieftains have hailed President Buhari’s decision in giving priority to reconciling aggrieved party members and the appointment of Tinubu to lead the consultation, reconciliation and confidence building efforts toward improving cohesion within APC.

However, party chieftains who spoke with INDEPENDENT on Thursday said since Tinubu is not a neutral person and is deeply involved in some of the events causing crisis in the party, it remains to be seen how he as head of the reconciliation panel will initiate the peace moves between himself and some key leaders of the party which include President Muhammadu Buhari, Senate President Bukola Saraki and Chief John Odigie-Oyegun, National Chairman of the party, who he wanted sacked.

According to APC sources, the biggest conflict in the ruling party is between Tinubu himself and Saraki. Both men have been at loggerheads since June 2015 when Saraki against all odds defied the directives of the party and connived with senators from the opposition Peoples Democratic Party (PDP) to emerge Senate president.

His action was seen by many as a direct affront to Tinubu, who wanted to install Senator Ahmad Lawan as the number three man.

Since his emergence, Saraki has been going in and out of the courts on allegations of corruption which many of his supporters link to Tinubu. Inside sources said both men hardly see eye-to-eye and stakeholders are waiting to see how the reconciliation between the two plays out.

Speaking with INDEPENDENT, a member of the party’s National Working Committee said the major hurdle before Tinubu is reconciling with Saraki, adding that this will go a long way in fast-tracking the healing process the party seriously craves for.

“To me, the major hurdle before Asiwaju Tinubu is how he will reconcile with Saraki. It is a tough task because given Tinubu’s influence, we are all wondering if he will be humble enough to go to Saraki and seek a truce. It is a herculean task but we believe nothing is impossible”, he said.

Stakeholders are also wondering how Tinubu will mend fences with Odigie-Oyegun. Though he was instrumental to his emergence as national chairman, Odigie-Oyegun in several of his decision-making process has gone against Tinubu as witnessed in his handling of the Kogi and Ondo governorship primaries leading to Tinubu’s demand for his resignation.