The applicant was said to have arrived the passport office at about 7.am in company of his wife and they were asked to wait till 9.am when they would be attended to.

It was gathered that at about I0.am, the man became restless and started complaining of severe heat and discomfort. He, however, requested to use the rest room.

However, trouble started when he didn’t come out of the toilet after about half an hour and his his wife became very worried.

It was learned that after about 40 minutes, attendant from the agency knocked several times and he did not respond. ”We tried to open the door, but it was locked from the inside,” the attendant said.

An official who spoke on the condition of anonymity, said: “We don’t know what was wrong with him, he came with his wife, he was so uncomfortable with him self and a bit aggressive, complaining that he should be attended to as he and his wife arrived the passport office before other applicants.

”Later he went into the convenience to ease himself. Later an attendant knocked severally on the door but no response. We couldn’t force the door open, because our superiors warned that we should not break the door until the police arrived the scene.”

It was learned that when the police arrived and forced the door to the toilet opened, an official of the passport office said they found the deceased on the floor.

Confirming the incident, the Passport Controller in charge of Ikoyi Passport office, (PCO) Mani Yari, said: ” Yes, it is the true, an applicant died in our toilet. He came to our office with his wife. There was no queue, as he did not come to collect Passport. We attend to applicants from 9am. Along the line, the deceased said he wanted to ease himself .

It was after about 40 minutes that the wife started raising the alarm that her husband had not returned from the toilet. We thought it was the normal panic from a woman. But when we arrived the scene and he did not open the door, we called the police who came and forced the door open and we saw the lifeless body. The body has been deposited at the mortuary for autopsy. 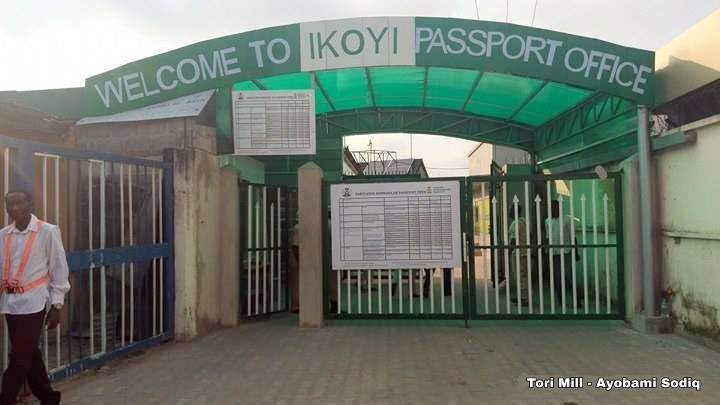 Thank you for visiting us, We hope and long to see more of your visit again… Hope you enjoyed your views?

"A Must Watch:- PURE DRIVING"
SEE MORE VIDEOS
Follow Us on Social Media: