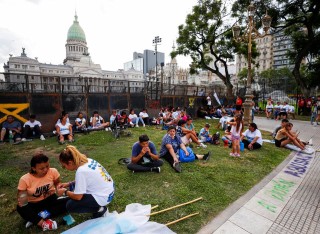 Argentine economy minister Martin Guzman said late on Friday that a $45 billion debt deal with the International Monetary Fund will not be modified, following a meeting with IMF head Kristalina Georgieva.

“We are not going to change the goals of the program with the IMF,” Guzman told local media.

The South American country’s center-left Peronist government led by President Alberto Fernandez struck a staff-level agreement with the international lender at the beginning of March to avoid a default.

The deal lays out a fresh schedule of financing over a 30-month period to replace a failed $57 billion program from 2018 that the grains-producing country was unable to pay back after years of recession, spiraling inflation and capital flight

However, Guzman cautioned without giving more details that there will be a change in emphasis to focus on the social safety net due to the fallout from the Russian invasion of Ukraine which has triggered worldwide inflation.

Argentina has long suffered from extremely high inflation. However, the war has increased price surges in Argentina as well as much of Latin America. Argentina’s 2021 inflation hit above 50%.