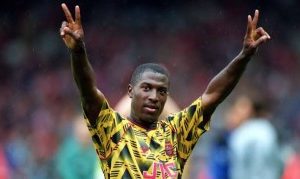 Former Arsenal striker, Kevin Campbell, has described Cristiano Ronaldo as the best player in the world, insisting the Portugal international is not responsible for Bruno Fernandes’ dip in form at Old Trafford.

Following his move to Manchester United in 2020 from Sporting CP, Fernandes scored 40 goals and provided 25 assists in his first 80 games for the Red Devils.

But he has had just 26 goal contributions in his last 54 games.which translates to a dip in his form following the arrival of Ronaldo from Juventus in the summer of 2021.

However,, Campbell does not believe Fernandes’ struggles is Ronaldo’s fault during an interview with Football Insider,

“Look, again, sometimes a player might not think it is but the stats might say something different,” he said.

The player, obviously, in his head, it’s nothing to do with Ronaldo…

“He is the best player in the world and he will continue to overcome barriers that others cannot.”