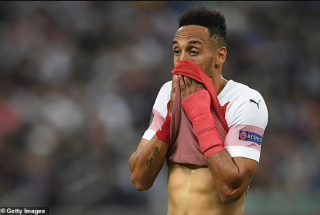 Arsenal striker, Pierre-Emerick Aubameyang has reportedly tested positive for coronavirus on arrival in Cameroon for the Africa Cup of Nations opener with Comoros, days after he was spotted partying with teammates in Dubai.

The striker, who was stripped of the captain’s armband last month for three different disciplinary breaches by boss Mikel Arteta, reportedly contracted the virus on his arrival to Cameroon, meaning he will now have to self-isolate.

The news comes days after Aubameyang was filmed out in Dubai partying with Gabon team-mate Mario Lemina.

Lemina, the former Southampton and Fulham midfielder who now plays for Ligue 1 side Nice, has also tested positive.

The tournament in Cameroon will get underway on January 9.