Atiku May Lose Big In G5 States In 2023 Presidential Election 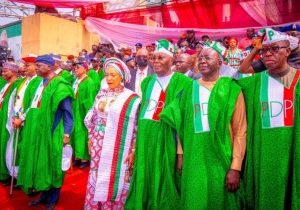 THE Peoples Democratic Party (PDP) candidate in the February presidential election, Atiku Abubakar, may lose a significant number of votes if the party fails to resolve its internal crisis before the 2023 election.

As the election draws nearer, The ICIR takes a closer look at the number of votes gathered by the PDP in the 2019 elections in the G5 states.

PDP and Abubakar are still battling it out with the G5 integrity group over the retention of Iyiorcha Ayu as the party’s national chairman.

The five governors that make up the G-5 – Okezie Ikpeazu (Abia), Seyi Makinde (Oyo), Ifeanyi Ugwanyi (Enugu), Samuel Ortom (Benue), and Nyesom Wike (Rivers) – are insisting that Ayu, a northerner like Abubakar, be removed as chairman if the party must have their support and votes in the presidential election.

The governors maintain it would be politically immoral for the party to pick both its national chairman and presidential candidate for the February election from the North.

The breakdown of the votes showed that Wike’s Rivers State delivered 473,971 votes for PDP, representing 71 per cent of the votes in the state.

The number of registered voters in the five states, according to 2022 data released by the Independent National Electoral Commission (INEC) is 13,471,789.

The figures imply an increase in number of registered voters and a remarkable expectation of voter turnout in the 2023 general elections, which makes it a big deal for any party hoping to win the election.

As the country prepares for another election, Abubakar will be contending with the rebellion of the five governors in his quest to realise his life-long ambition of becoming president of Nigeria.

Although the G5 governors have maintained their membership of the PDP, saying they would not defect, they have also remained unwavering in their words against Ayu’s chairmanship of the PDP and their intention to work against Abubakar in the presidential election.

Well, with Ayu not intending to step down anytime soon as PDP chairman, the aggrieved governors have also not been appearing in Abubakar’s campaign since the party flagged it off last year.