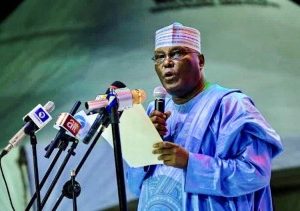 Pending graduation of the presidential candidate of the Peoples Democratic Party (PDP), Alhaji Atiku Abubakar, at the Anglia Ruskin University, Cambridge, the United Kingdom, has been largely responsible for delay in the proposed reconciliation in the party, especially, the need to pacify the Rivers State Governor, Nyesom Wike.

But, Chairman of the PDP Board of Trustees (BoT), Senator Walid Jubrin, has also said the absence of the National Chairman of the party, Dr. Iyorchia Ayu, has further contributed to the delay.

This, nonetheless, Atiku, yesterday, through his verified Twitter handle, reaffirmed his commitment to pairing with the Delta State Governor, Ifeanyi Okowa, as his running mate.

THISDAY sources hinted last night that the PDP candidate, who has just bagged Master of Arts in International Relations, at the Anglia Ruskin University, Cambridge, is due to graduate next week, July 13th, the very reason Atiku has been unable to be part of the reconciliation in the party.

The source explained that the PDP candidate was concerned about the situation in the party and has been following development, but has been held down by school activities, which would be over next and enables him to lead the proposed reconciliation in the party.

However, shedding more light to the situation, the PDP BoT chairman told THISDAY that once Atiku and Ayu returned from their overseas trips, he would personally take his recommendation to them and see to the implementation of his recommendation.

He said he had to intervene, because elders don’t stay at home and the goat will give birth while bonded.

According to him, “convention that elected the presidential candidate has come and gone, we therefore need to put our house in order so as to win presidential election. There is nothing that cannot be done.

“We are a party that is organic and we will put all organs in place so that we can put our house in place by ensuring reconciliation. This election is for PDP to loss .”

According to Jubrin, he would personally take the recommendation to the national chairman and the PDP presidential candidate, whom he said were billed to return to Nigeria soon.

The PDP BoT chair had recommended the setting up of a high-powered delegation to visit Wike to try to reconcile with him.

This is because Wike has been unhappy over the outcome of the party’s presidential primary, won by Atiku. But the situation was further compounded, when Atiku chose Delta State Governor, Dr. Ifeanyi Okowa, as his running mate, after some governors had voted for Wike.

In a statement yesterday in Kaduna, Jibrin said it was imperative to set up a delegation to visit Wike for reconciliation and that the presidential candidate himself should lead the delegation.

He also frowned on comments being made by some party members and Nigerians over the choice of Okowa as the presidential running mate.

“We must come back to our senses and give total support to the party to enable it form government in 2023. It is very necessary that our presidential candidate, Alhaji Atiku Abubakar, and the national chairman of the PDP, Senator Iyochia Ayu, immediately visit Wike as soon as they return to the country,” he said.

Jibrin further suggested that, while Atiku and Okowa should lead the delegation, other members of the team should include members of the National Working Committee (NWC), himself, the 13 PDP governors, and former governors of the party, among others.

Meanwhile, Atiku has reiterated his commitment to the Delta State Governor, Ifeanyi Okowa, as his running mate.

Atiku, on his verified Twitter handle @atiku tweeted that with Okowa, standing at his side, they would be unbeatable as a people and as a nation.

“With you@IAOkowa standing at my side, we’d be unbeatable as a people and as a nation,” he tweeted.

Responding, Okowa, too replied, stating: “Know this, with @Atiku Abubakar at the frontline, no one will be left behind in the march to this country’s greatness.”

The Kano State chapter of the PDP, yesterday, called for Ayu’s resignation in the light of developments in the party.

Chairman of the party in the state, Shehu Sagagi, made the call at a press conference in Kano and recalled how Ayu made a promise in Bauchi, to resign his position, should the presidential candidate of the party emerge from the north.

“This is somebody who promised to resign his position if the presidential candidate of the party emerge from the north, hence, the reason why we are calling on him to resign in fulfillment of the earlier promise,” he said.

He noted that, since the party now has a presidential candidate from the north, in the person of Atiku Abubakar, the national chairman should honour his words, by resigning from his position.

Sagagi also called on all aggrieved parties in the state to join hands together to move the party forward to ensure its success in the 2023 general election in the country, adding that, the PDP in the state remained loyal to Atiku.

The PDP, yesterday, said that it was targeting over 20 million voters from the ongoing voter registration exercise across the country, as part of the sensitisation and mobilisation of voters for the 2023 general election.

The party, however, urged prospective voters to not only register, but vote, as their votes would certainly count this time around.

There was also a mild drama during the sensitisation campaign, when one of the vehicles on the convoy rammed into the Range Rover car of the PDP National Youth Leader, Mohammed Suleiman Kadaga, around the Grand Square Super Market in the Central Business Area of Abuja.

The youth leader called on youths to come out and register and as well vote during elections.

He said, “come out and vote. Don’t be on your phones all the time. Vote. Your votes will count.”

The women leader appealed to the large population of women in the country to register and come out to vote.

She said, “In the next general election, your votes will count. Don’t just register and put your Permanent Voters Cards in your cupboard or drawer; register and ensure you vote. Vote. We will not engage in vote buying; come out and vote and your vote will count,” she said

Speaking with newsmen men after the road show, National Publicity Secretary of the party,Debo Ologunagba, urged the youths and women to compare what was happening in the country between 2015 and now and register to vote wisely

According to him, the All Progressives Congress (APC) is a party of lies and propaganda .

“Unemployment is rising in the country on a daily basis. Insecurity is a daily phenomenon in Nigeria. Prices are going up daily. Inflation is on the increase. In 2015, a bag of rice is N7000 per bag and today, it is almost N35, 000, while a loaf of bread goes for almost between N900 and N1100.

“Go and register and use your vote to chase out the APC. Your vote is your strength and we assure you that your votes will count on,” he stated.

The sensitisation and mobilisation of voters roadshow moved from the Maitama office of the party to popular Wuse market, to the Area 10 market and Area 2.

The roadshow which dragged till late, also moved towards the Lugbe area, to end at the Kuje area council.