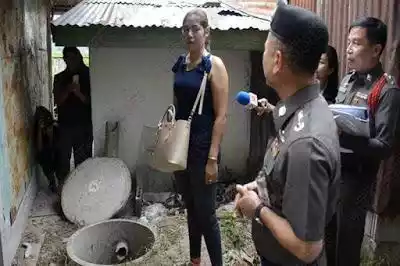 A 22- year-old woman in Udon Thani, Thailand has been charged with murder after she admitted to stabbing her 62- year- old husband to death.

According to Thaivisa, argument ensued between Nittaya Saengdeuan and Amnuay Wensila after she found a condom in his trouser pocket and thought he was having an affair.
Saengdeuan stabbed Wensila multiple times until he was dead. She then stuffed his still warm corpse into a septic tank behind their garage.
Nittaya initially denied any involvement. But under intense interrogation she broke down and admitted what she had done and was then taken on a reenactment of her crime.
On Wednesday, November 15, the head of the Udon Thani provincial police Peerapong Wongsaman led a team in interrogating the suspect who had been apprehended by Nong Wua Sor officers.
Amnuay’s curled up body was found in the septic tank at the house in Oup Mung sub-district.

Nittaya told the cops that she had found a condom in her husband’s trousers and jealously believed he had a “gik” or other woman.
An argument developed and she stabbed him. He ran out to the garage and she chased him.
Then she stabbed him a further ten times until he was dead. Then she dragged the corpse and stuffed him down the septic tank.
She has been charged with murder with intent while police may add charges of removing and concealing a corpse to the rap sheet. 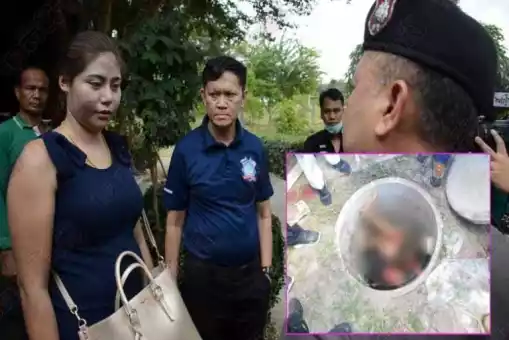