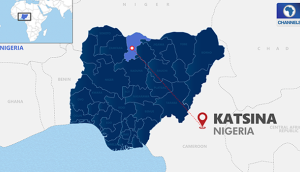 An eyewitness told Channels Television that the terrorists in their numbers and armed with sophisticated weapons invaded the village on motorcycles on Wednesday at about 3:55 pm when the faithful were preparing for Asr prayer.

During the attack, according to the eyewitness, dozens of people, mostly women and children were said to have been abducted.

The eyewitness added that hundreds of residents ran for safety.

The terrorists on their arrival started shooting sporadically along the Katsina Ring Road which is close to the Katsina town, the eyewitness said, adding that during the attack, which lasted for over 45 minutes, no security personnel was seen.

The attack on Dantsauni village comes three days after some terrorists were said to have attacked neighboring communities of Babbar Ruga, Kwarin Maikotso and Kore villages where the terrorists killed two persons and abducted eight others.

Meanwhile, the State Police Command through its Spokesman, SP Gambo Isah, also confirmed the attack, stating that one person was killed and two others injured.