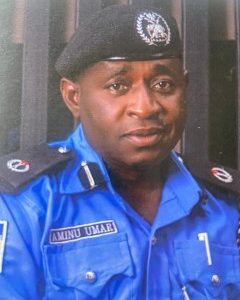 Aminu Umar, an Assistant Commissioner of Police, has been shot dead by bandits in Katsina State.

The deceased and his team members were ambushed while on a clearance operation in Zakka forest, Safana Local Government Area of Katsina State, on Tuesday.

Until his death, Umar was the Area Commander of Police in Dutsinma.

Sources within Zakka community told Daily Trust that police and bandits clashed at a village called Yauni in Zakka district of Safana.

Our vigilantes here told us that there will be a combined team of policemen with vigilantes from Kurfi heading to Yauni village to face bandits and they joined the team.”
Later we heard that there was a fatal clash and some police officers and some vigilantes were shot by the bandits.

“However, about seven military vehicles have provided reinforcement in the area; we later saw some police vehicles conveying some bodies but I could not identify the corpses because I was not close to them,” he said.

(ACP) Aminu Umar, who paid the supreme price in a clash with bandits in Katsina state.

Commenting on the incident, SP Gambo Isah, Police Public Relations Officer in Katsina, said Umar died in a battle the police had with over 300 bandits.

He said one other person died in the incident, but he did not disclose the identity of the other victim.

“Today 06/07/2022 at about 1130hrs, a distress call was received that terrorists numbering over 300, on motorcycles, shooting sporadically with AK 47 rifles and General Purpose Machine Guns (GPMG), ambushed ACP Aminu Umar, Area Commander, Dutsinma and team, while on clearance operation of recalcitrant bandits/terrorists, in Zakka forest, Safana LGA of Katsina state.

“Consequently, the Area Commander and one other gallantly lost their lives during a cross exchange of gun fire.

“The Commissioner of Police, CP Idrisu Dabban Dauda, on behalf of the officers and men of the Command expresses his deep sympathy to the family of the deceased and pray to almighty Allah to repose their souls in Jannatul Firdausi. He reaffirms the Nigeria Police Force’s commitment on the ongoing onslaught against terrorism in the state until it is completely routed out, please,” he said in a statement.