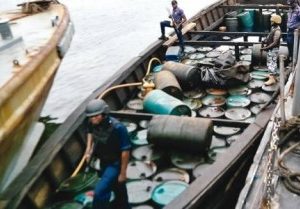 According to a report by SaharaReporters, a traditional ruler in Bayelsa State, the Amadaowei of Adagbabiri Community in the Sagbama Local Government Area, Alaowei Okee, has gone into hiding.

The monarch raised the alarm over threats to his life by top government and security officials who are neck deep in illegal oil bunkering activities in the state.

To avoid a repeat of what happened at Kalaba community in Yenagoa Local Government Area, the paramount ruler said he had decided to run into hiding as indications showed that his life was not protected.

Recall that the paramount ruler and the residents’ Chairman of Kalaba Community in Yenagoa LGA of Bayelsa State, Chief Francis Kolubo and Mr Samuel Oburo respectively were brutally murdered by persons suspected to be kingpins of crude oil pilfering.

The deceased had allegedly mounted stiff opposition to the illegal oil bunkering activities in the community.

Another report however said the Kalaba incident may be linked to a chieftaincy tussle that was rocking the community.

The distressed paramount ruler of Adagbabiri community in a telephone chat with SaharaReporters, narrated that the oil thieves led by a senior officer attached to the Bayelsa Command of the Nigerian Security and Civil Defence Corps, a local government vice chairman and some top political appointees in the state approached him about two months ago in his palace to use his community as a base for their illegal oil transactions.

He added that they offered to pay him N200,000 per truck of oil offloaded from the community’s waterfront but he refused to oblige them.

He further explained that he refused their offer because apart from the financial benefits offered to him, the community would suffer serious environmental oxidisation; attract hoodlums with resultant cult clashes and unnecessary gun running activities that would bring about other security breaches.

The paramount ruler said, despite his refusal, the illegal oil barons had resumed their reprehensible trade two months, after he turned down the offer.

However, the monarch said he had since put a call across to the state Commissioner of Police, the state Commandant of the NSCDC as well as the Nigerian Navy commander in the state who promised to look into his complaints.

“But business is going on unabated in the community despite these complaints. This forced me to leave the community and go into hiding to avoid a repeat of the Kalaba community incident,” the monarch said.