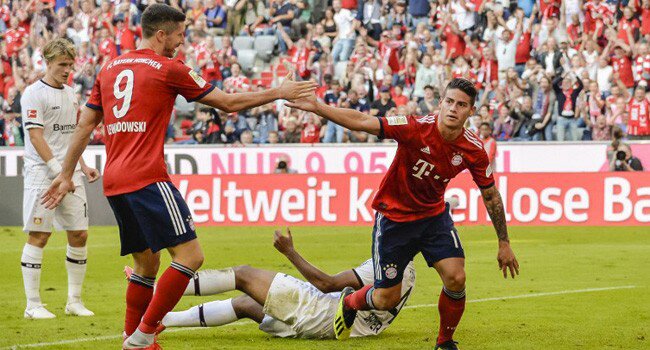 Goals from Arjen Robben and James Rodriguez helped Bayern Munich maintain their grip on the top of the table as they beat Bayer Leverkusen 2-1 on Sunday, plunging their opponents into an early season crisis.

With three defeats in three, Leverkusen have made their worst ever start to a Bundesliga campaign.

Leverkusen got off to a dream start when Thiago’s handball gave them a penalty in the second minute.

Manuel Neuer initially denied Kevin Volland from 12 yards, but the spot-kick was ordered re-taken for players encroaching into the area and Wendell smashed in the retake.

Leverkusen’s joy was short-lived, as Corentin Tolisso prodded in the equaliser just four minutes later, and Robben fired Bayern ahead with a superb volley on 20 minutes.

“It wasn’t easy today, but luckily we bounced back quickly,” Robben told Sky. “I don’t want to criticise my team-mates, but everybody needs to pull their weight when we are pressing.”

Leverkusen’s fate seemed sealed when Karim Bellarabi was sent off for a reckless challenge on Rafinha ten minutes from time, and James Rodriguez added Bayern’s third in the 89th minute.

Promoted Duesseldorf snatched a surprise 2-1 win over Hoffenheim, who make their Champions League debut next week.

Alfredo Morales headed Duesseldorf ahead against the run of play on the stroke of half-time. English youngster Reiss Nelson, on loan from Arsenal, appeared to save his team’s blushes when he scored on debut to make it 1-1.

The relief did not last long, though, as Dodi Lukebakio restored Duesseldorf’s lead from the penalty spot on 88 minutes.

Germany international Timo Werner scored twice to inspire RB Leipzig to their first win of the season in a 3-2 thriller against Hanover.

On his return to the starting eleven, Yussuf Poulsen nodded Leipzig ahead on ten minutes, before Niclas Fuellkrug blasted in an equaliser for Hanover a few minutes later.