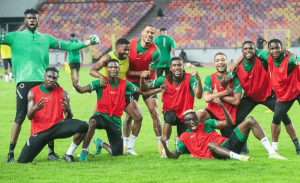 Every major club in Europe wants a piece of the Nigerian international, who may now be set for a return to the German Bundesliga

According to a report by authoritative Italian publication, Corriere dello Sport, Bayern Munich have made contact with Napoli for the transfer of Super Eagles striker Victor Osimhen.

The Bavarians are resigned to losing star forward Robert Lewandowski, who is keen on joining La Liga giants Barcelona. And they want Osimhen to lead their attack next campaign.

Recent media reports have linked Cristiano Ronaldo with a move to the Allianz Arena, but Bayern desire a more long-term replacement for Lewandowski.

At 37, Ronaldo is past his prime, though he was the top goalscorer for Manchester United last season.

Victor Osimhen snubbed several teams, including Arsenal, to sign for Vfl Wolfsburg in 2017.

The Wolves were the youngster’s first European club after leading Nigeria to the FIFA u-17 World Cup triumph, where he was a record top goalscorer.

But he only featured in 16 matches for Wolfsburg before accepting a loan move to Royal Sporting Charleroi in 2018.

Bayern Munich had a taste of the Osimhen magic last year when he scored a brace to lead Napoli to a 3-0 triumph over the Bundesliga big boys in a preseason friendly.

A lot, however, depends on Lewandowski’s potential switch to Spain.

Bayern would be in desperate search of a top-quality forward should the Polish target man departs the Allianz Arena.

Even at that, the Germans will find Napoli a demanding customer unwilling to let go of their most prized asset on the cheap.

The Nigerian forward has shown no sign of being tired of life in Naples, even though the English Premier League remains a dream destination.