BBNaija 2021:- Video Contradicting Pere’s Claim Of Whitemoney Not Shaking Him When He Got To The House Emerges

BBNaija 2021:- Video Contradicting Pere’s Claim Of Whitemoney Not Shaking Him When He Got To The House Emerges 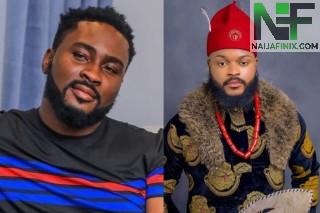 A video which captured the moment Whitemoney gave Pere a hand shake when he got into the Big Brother Naija House has surfaced online.

Recall that there was a mild conflict between Whitemoney and Pere a few days ago. When he was been dragged to the garden by Maria and Boma to express regret to Whitemoney, he made the claim that Whitemoney refused to shake his hands or look into his eyes when he entered the house because of the information he was aware of.

The housemate, who refused to apologize for his actions, said that Whitemoney was given information about him and Maria being the wildcards by an outside source.

Meanwhile, a fresh video has popped online showing that Whitemoney actually shook his hands when he entered the house.

See some reactions culled from Nigerians who chanced upon the video:

steezofthewholeworld wrote; E get brain problem…even if e no greet you and so? Plenty ppl dey wake up go about their buisness without saying God good morning o,how many God don kill?

meldy_official wrote: I personally don’t think that Pere hates WM in the real sense of hates…because he still eats whatever WM cooks…it could be that he actually sees him as a strong contender in the game and probably trying to counter it in a wrong way

lisa.e.brown.58 wrote; Pere; white money refused to look ma way or shake me, I had to force myself to shake him Now we all seeing receipt