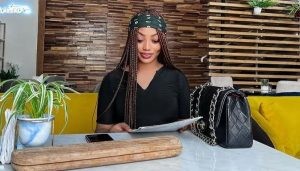 Christy O made this known during her media rounds.

When asked to mention housemates with the ‘fakest ship’, she said that ”Bella and Sheggz, Khalid and Daniella had a fake relationship.”

She also disclosed that Amaka told her Daniella and Khalid were making love in the house.

Recall that Daniella and Khalid had been criticized for ‘making love’ in the house.

Both ‘Level up’ housemates were seen ‘making love’ under the duvet last Sunday night.