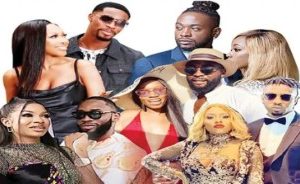 Without a doubt, the popular Big Brother Naija reality show has been a source of huge entertainment for many Nigerians, especially the youths.

It has also served as a place where many love stories have blossomed. Some former Big Brother Naija contestants have gone on to become couples. Some of them got married while some of the relationships crashed.

Saturday Beats takes a look at them

The winner of the fourth season of the reality show (Pepper Dem, 2019), Mercy Eke, and another contestant on the show, Ike Onyeama, became an item while in the house, as they were often in each other’s company. Their love seemed to be so ‘strong’ and at the time, Eke stated that their love would continue smoothly even after the show, despite insinuations that she would ditch him upon leaing the house. She had said, “I was single before going into the house. But now, you should expect love and friendship (between me and Ike). We will work as partners. Money has nothing to do with the love we share. Money has nothing to do with our relationship. It won’t affect us.”

The couple even went on to host a reality show together called, ‘Mercy and Ike Show’.

However, things took a nosedive and the lovebirds called it quits when things turned sour between them.

However, in a shocking twist during the week, Mercy denied ever dating Ike, adding that she could only speak for herself. When asked if she was in a relationship with Ike on a podcast with Nedu and Pretty Mike, she said, “I don’t know what you are talking about.”

When pressed further by Pretty Mike on Ike claiming she was his girlfriend, Eke insisted, “I can speak for myself. I cannot speak for anybody. I still don’t know what you are talking about.”

Dancer, Roseline Afije, aka Liquorose, and another contestant, Emmanue Omoh, bonded well while participating in the 2022 edition of the show (Shine ya Eye), but according to them, they only started dating after the show had ended.

The relationship was however short-lived as they both went their separate ways on the account that Emmanuel cheated on her while they were in Dubai, United Arab Emirates. She stated that she walked in on him and another lady in a hotel room. However, Emmanuel vehemently denied having anything to do with the lady he was seen with. According to him, he was only meeting an old friend and he allegedly slept off in the course of their conversation, before Liquorose came in.

Giving her own version of events, Liquorose, “The light was off, music was playing and the girl was sitting at the edge of the bed, which was rough. She also covered her face with a mask.”

Responding to his former lover, Emmanuel said, “Meeting a friend after a long time should not be a problem.”

Neo Akpofure and Victoria Adeyele began their relationship while still on the 2020 edition of the reality show (Lockdown), and they both continued that way after the show.

When asked in an interview what attracted him to Vee, Neo had said, “Her confidence was very sexy to me and it made me fall for her. Then, the way she talks. I can listen to her for the rest of my life.”

However, it turns out that they may not be spending the rest of their lives together because the duo has since broken up.

In February 2022, Vee wrote in a social media post, ‘Soft and single’. This was after she had ‘unfollowed’ him on social media and deleted all the pictures they took together from her social media platforms.

BamBam and Teddy A

Tope Adebuniyan and his lover-turned-wife, Oluwabamike Olawunmi, caught each other’s eyes while in the 2018 Big Brother Naija house (Double Wahala). Viewers of the show had actually tagged them as ‘BamTeddy’.

However, they were also subjects of criticism when it was alleged by some fans that they both had sex while in the house, though that cannot be confirmed. Some lovers of the show also opined that their relationship would not last.

But so far, they have proved the naysayers wrong. On August 3, 2019, the duo hinted that they were engaged when Teddy A posted a picture showing Bambam’s wearing a ring, while some flower petals around her spelt the sentence, ‘Will you marry me?’.

On September 9, 2019, they had a colourful wedding in Dubai, and it was attended by friends and family members of the couple.

The couple welcomed their first child, Zendaya, on March 5, 2020.

An officer with the Metropolitan Police, England, Khafilat Kareem, aka Khafi, and another housemate, Gedoni Ekpata, bonded really well in the 2019 edition of the show (Pepper Dem).

While in the house, Khafi never hid the fact that she ‘found peace being around Gedoni’. Though some people felt their relationship would not last, they proved otherwise when they announced their engagement in December 2019.

Khafi took to her Instagram page to post a picture of herself and Gedoni with the caption, “I said yes. And, I got the best Christmas gift ever. Mrs Ekpata loading.”

They eventually got married on September 24, 2020, at the Ikoyi Marriage Registry, Lagos.