BBNaija: Things Get Super Cosy Between Sheggz And Bella 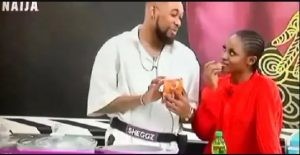 Yesterday, the two had an intimate conversation about each other. Sheggz expressed that he does not want to seem like a guy that expresses his feelings too openly like previous Housemate Ozo.

BBNaija housemates, Sheggz and Bella cozied up on the couch for a chat after morning workouts and preparations for the day.

With her feet on his, and his hands holding hers, the two spoke about the state of their relationship. They also reflected on their last conversation.

Yesterday, the two had an intimate conversation about each other. Sheggz expressed that he does not want to seem like a guy that expresses his feelings too openly like previous Housemate Ozo.

Their conversation led to requests for more effort. Sheggz feels like Bella is not reciprocating his attempts to build their relationship.

“You’re beautiful, but you need to make effort,” Sheggz says.

Bella’s response echoed the very same sentiment. She said “I never told you to make an effort. To get me you have to put in work.” The two Housemates feel like the other is not working hard enough to build and grow their relationship.

Sheggz kept referring to Bella as ‘babe,’ who asked to be called by her name. But Sheggz prefers ‘babe’ because everyone else calls her Bella and he is not everybody else.

The two started talking about what they would do outside the House together. They spoke of travelling and Sheggz saying he would spoil her rotten. They seemed to have a healthy conversation with a lot of laughs and hand holding.

Not only did Bella receive a kiss on the hand, but she got a list of promises too. He reassured her that he would never make her feel small, scared or disrespect her in any way.

However, Bella reiterated that she does not want to lose focus and is here to win.

Does this mean she will not fall for Sheggz’s advances? Keep watching to find out how this one unfolds.