BBNaija: Whitemoney Is The Kind Of Man I Want, Says Jackie B

She said this in response to Whitemoney’s advances as Tega asked her if Jackie B wants to go on with the relationship. 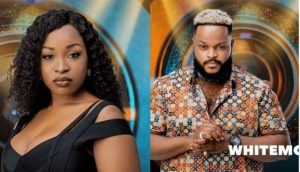 “I’m not saying that it’s not possible for me to date him. It can honestly happen but I have to reprogram my mind to start seeing him in that way. But with him, I didn’t even suspect him for one second.”

In response, Whitemoney said, “That’s how I move, that’s how I come. I don’t come and shout ‘I love you’.”

Jackie B continued, “He’s a mature man, that’s the type of man that I want, a grown ass man that knows what he wants. That’s my type of person.”
Jackie B in a web of ‘ships’

Since the beginning of the show, Jackie B has found herself in a web of ‘ships’ and love triangles with some of the male housemates.

It started with Boma, who chose her as his Deputy Head of House in the second week. This sparked talks about the duo being a ship.

In the third week of the show, however, Michael emerged and he seemed to sweep the mother-of-one off her feet as she became clingy to him from the first night.

That didn’t last for long because Jackie B cleared the air about her relationship with Michael, who was already finding Angel attractive.

Angel, however, claimed that her relationship with Michael was platonic and nothing more.

While Jackie B was in a love triangle with Angel and Michael, Whitemoney emerged and professed his affections to Jackie B.