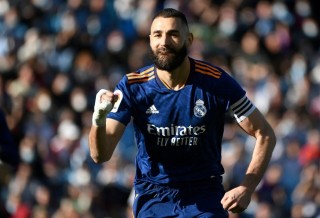 Karim Benzema missed one penalty but scored two as Real Madrid scraped past Celta Vigo on Saturday to get back to winning ways ahead of Wednesday’s crunch Champions League meeting with Chelsea.

A 2-1 win at Balaidos will calm any nerves in La Liga’s title race, allowing Madrid to draw a line under their thrashing at the hands of a resurgent Barcelona before the international break. And, despite an imperfect performance, victory should restore confidence ahead of the first leg away at Chelsea, with Thomas Tuchel’s side now recovering from a humiliation of their own, after they were earlier thumped 4-1 at home by Brentford.

Chelsea, who outplayed Real Madrid over two semi-final legs last year, will be a much sterner test than Celta and Carlo Ancelotti’s side will almost certainly not have the benefit of being awarded three penalties at Stamford Bridge. Thibaut Courtois was also called upon again to make some excellent saves to deny Celta at least a draw.

Celta had reason to feel at least one of the spot-kicks given by referee Pablo Gonzalez was harsh, with Rodrygo and then Ferland Mendy both going down easily under the lighest of challenges. Benzema missed the second against Celta’s Matias Dituro but scored the first and third, the Frenchman marking his return from injury with an important brace that takes his goal tally for the season to 39. Real Madrid’s chances against Chelsea are improved immeasurably by the recovery of Benzema, and also Mendy, who offers so much more solidity at left back than either Nacho Fernandez or Marcelo.

Any hopes Barcelona had of causing a collapse may already have been dashed, with Real Madrid now 12 points ahead of Sevilla and 15 in front of the Catalans, who have two games in hand, the first of them against Sevilla on Sunday. Barca and Sevilla are most likely now fighting it out for second.

Ancelotti’s positive test for Covid-19 last week meant he was unable to take his place on the sideline and it remains to be seen if the Italian is able to make the trip to London. Benzema went close early on, heading wide Lucas Vazquez’s cross to the back post before Vinicius Junior forced a good save by Dituro after being slipped in by Casemiro.

Madrid found the breakthrough in the 19th minute when Eder Militao had his right foot taken away from him by Nolito, who bumped into the back of the Brazilian to give away the first penalty. Benzema rolled it right. Dituto dived left. But Celta were undeterred and shorty after half-time, they pulled level.

Toni Kroos and Casemiro were bypassed too easily in midfield and Iago Aspas spread left to 17, whose slid pass into the box allowed Nolito an easy finish. An Aspas free-kick almost curled in at the back post and Celta were gaining momentum, only for Madrid to be awarded a second penalty after Rodrygo made sure he tumbled over the planted left leg of Jeison Murillo. Benzema stepped up again but this time shot left, Dituro jumping the same way and making the block with his right elbow.

The contest was in the balance now, with Madrid straining to reassert their advantage. Celta could barely believe it when, in the 70th minute, Gonzalez blew again for a third penalty, penalising Kevin Vazquez for obstructing Mendy, despite the Celta defender doing his best to get out of the way. Benzema took the ball again and if Dituro had dived the same way he might have saved it. Benzema went left, Dituro right, and Madrid held on for the win.